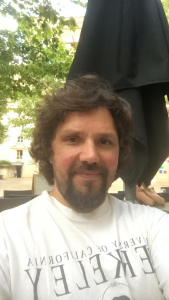 I am full professor at the Faculté des Sciences et Ingénierie, Unité de Formation et de Recherche d’Ingénierie of Sorbonne Université (ex UPMC) since 2010, previously, I was associated Professor in Chemistry department of UPMC. I am also member of the CEPT group in Institut Jean Le Rond d’Alembert. I graduated in Physical Chemistry at Université Pierre et Marie Curie (UPMC) in 1993. I received the MSc and PhD degrees in Chemistry and Chemical Engineering from Université Pierre et Marie Curie in 1997 and in 2000, respectively.

My research activities focus on the Catalysis for Clean Energy and Environment. Since 2004, I am working on the development of Plasma Catalytic systems. First, I worked on air pollution abatement, then on polluted water treatment, and since 2013 on CO2 utilization.

Within PIONEER, I am the coordinator of the project, and as supervisor, I am mostly involved in the design on new plasma catalytic reactors.